< BACK TO ALL RECIPES 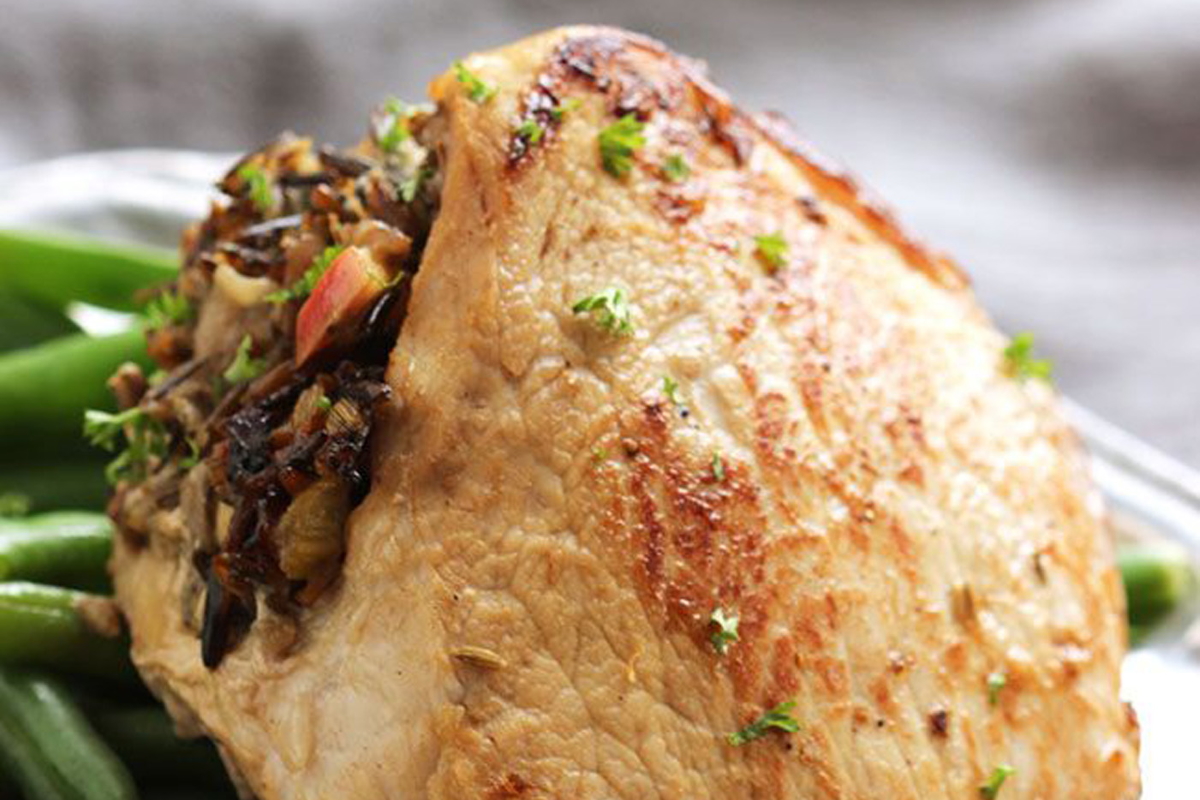 On a cutting board or silicone mat, carefully cut a small pocket in the pork chop by laying the chop on its side and cutting horizontally, being careful not to cut all the way through the chop. Set aside. Heat oil in a large saucepan over medium heat. Add the chopped celery and onion, cooking until softened, approximately 5-6 minutes. Stir in garlic and cook about 2 minutes. Add the rice and cook for one minute, stirring constantly. Stir in the sage and thyme. Add broth, apple cider and salt. Increase the heat and bring to a boil. Reduce heat to medium-low, cover, and simmer for 30 minutes. Uncover, stir, and continue cooking, uncovered, stirring occasionally, until all the liquid is absorbed and the rice is tender, about 30 minutes. While the rice is cooking, toast the walnuts in a small skillet over medium heat until fragrant. Transfer to a plate to cool. Once the rice is cooked, stir in the walnuts, dates and chopped apple. Season with salt and pepper to taste. Preheat oven to 375 degrees.

Stuff the pork chops with 1/2 cup of the wild rice stuffing and season both sides with salt and pepper.

In a large skillet over medium heat, heat 1 tablespoon olive oil. Add chops to skillet and cook until golden brown, about 2 minutes. Turn the chops and continue cooking the other side until golden.

To make ahead and freeze, follow instructions all the way to the point of stuffing the chops. Wrap tightly in plastic wrap and then wrap in foil. Place the wrapped chops in a freezer bag and freeze up to 30 days. To cook, thaw completely and then cook according to the directions above.
Recipes You May Also Like
View All Recipes
We use cookies to ensure that we give you the best experience on our website. If you continue to use this site, you agree to the storing of cookies on your device to enhance your site experience.
Cookie SettingsAccept All
Manage consent

This website uses cookies to improve your experience while you navigate through the website. Out of these, the cookies that are categorized as necessary are stored on your browser as they are essential for the working of basic functionalities of the website. We also use third-party cookies that help us analyze and understand how you use this website. These cookies will be stored in your browser only with your consent. You also have the option to opt-out of these cookies. But opting out of some of these cookies may affect your browsing experience.
Necessary Always Enabled
Necessary cookies are absolutely essential for the website to function properly. These cookies ensure basic functionalities and security features of the website, anonymously.
Functional
Functional cookies help to perform certain functionalities like sharing the content of the website on social media platforms, collect feedbacks, and other third-party features.
Performance
Performance cookies are used to understand and analyze the key performance indexes of the website which helps in delivering a better user experience for the visitors.
Analytics
Analytical cookies are used to understand how visitors interact with the website. These cookies help provide information on metrics the number of visitors, bounce rate, traffic source, etc.
Advertisement
Advertisement cookies are used to provide visitors with relevant ads and marketing campaigns. These cookies track visitors across websites and collect information to provide customized ads.
Others
Other uncategorized cookies are those that are being analyzed and have not been classified into a category as yet.
SAVE & ACCEPT